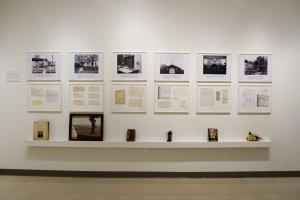 Lives are born in places like the waiting line of department stores. People waiting for their number to be pulled in the deli line take on a more physical shape and existence when they talk about Sunday’s game and the fact they can’t get enough of a particular sharp cheddar cheese, or when waiting for the first available table at the Olive Garden as they mention the time their young nephew soiled himself at his classmate’s birthday party. When these stories are uncovered, innocent unknown people around us suddenly have third cousins and brothers and stepmothers, and so on—people suddenly appear from nowhere, around us, among us.

The Woodrow Jefferson Project is a voyeuristic experiment in recording these relationships and lives that we create and establish. It asks, “What would happen if I found something from someone, and followed it back to its home? Who would be there?” It begins with a thrift store bible filled with receipts and stationary and funerary documents and someone’s personal paperwork for their life. It is the act of looking up every name on every piece of paper, it is going to the County Courthouse to find every record on this family, it is picking through their garbage (at night) to see who these shadows really belong to. It is a project driven by how uncomfortably close anyone can get to a past through the remnants and wake we leave, and how fictionalized and distant our relations really are, to show how many truths and fictions we can get from any little dealings we have and the complexity of human interaction as a whole.

Burlington Best Thrift/The Holy Bible:
It was (quite possibly) the largest bible I’d ever seen, with a stash of yellowed receipts and bits of legal pad peeking from between the pages, with only one thing penned in—anywhere—in the beginning. Woodrow Jefferson. On a slip of lined paper, his handwritten name had a crippled look to it, which reminded me of my great grandfather.

Maple Ave./The Frame and Print:
I researched the street numbers on each stationary stub; I parked and sat in the woods across from every Jefferson address in the city of Reidsville and Caswell County, to catch a family glimpse. Once I read his obituary, I found the Maple Avenue house, a dumpster partly on Mr. Jefferson’s lawn, and a nearby, gutted street shop. Sifting through the leftovers, I found a print peeling away, finally exposing a person’s shoe, in the corner, underneath.

Caswell County Register of Deeds/The 1866 Archive Bible:
The red, plastic-covered catalogues—held in the vault—had every family member, their related land deeds, marriage certificates, birth and death records. I paid twenty-five cents per page I copied; I stole an antique bible that I found below the nineteen sixty-nine notarized court case testimonies. On scrap pages, Mr. Jefferson matched every relative I uncovered with a scribbled name and phone number as their living testament.

Pentecostal Holiness Church/The Umbrella:
From the pile of business cards in the bible pages, I figured his car was in poor shape; from the appointment cards and optometrist bills, I could tell his eyes were failing him. But the most personal thing, for me, to have discovered was the death record for his infant daughter, who never lived to see a birth certificate. I wonder how these things affected him come Sunday; I mull over if he ever used the communal umbrellas outside his church—the give and take. 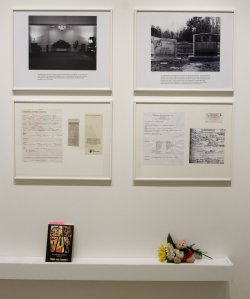 Wilkerson Funeral Home/ The Far Out New Testament:
I couldn’t find a timeline for when any of this was happening, or which one came first, his sister’s death or the paperwork he filled out for his own passing. Either way, he had the arrangements laid out as if it were a living room, as if his funeral were like moving furniture into a new home.

Assembly of God Cemetery/The Cemetery Flowers:
The night prior to my cemetery visit, a heavy rain had come through—strong winds tossing over small wreaths and angel statuettes. At the back corner, the roadside corner, of the graveyard was the Jefferson family plot (Woodrow tucked in front of his parents and beside his late wife). Once I studied what I’d come there for, I noticed all of the gravestones were back-splashed with red clay; I noted that bouquets of cemetery flowers doted the lot’s vacant end, no longer belonging to any one person.